step up and champion a cause using the ancient art of tug-of-war.

participants publically wage war one-on-one with the pvi conflict resolution team over a series of contentious issues that have the community divided, using only a 10m length of rope, their physical prowess and the strength of their convictions.

culminating in a series of quick and dirty performances, resist involves a short period of time on the ground soliciting information relevant to each location. this consultation period results in a number of local, global and/or uniquely personal issues with suggested solutions to resolving each topic. each issue is listed on an oversized scoreboard and individual audience members are invited to select one they would like to wage war over.

following the tug of war battle event, pvi deliver the results of our contests to a key civic leader in the community, handing over the official mantle of ‘champion of the people’ for them to implement suggested changes. in previous showings this has included filmed performative interventions in the offices of the w.a. police commissioner, the lord mayors’ of perth and junee and the president of chile.

resist can be carried out in any site and within any community. it necessitates a period of time on the ground to get to know local residents. it is a humorous, physical work but drop dead serious in its intentions to give rise to hidden, unspoken or disenfranchised voices within the community.

resist was originally commissioned by the south project as a live art event for museo de arte contemporaneo, santiago. it has since been adapted as an in-theatre work for awesome festival, played at various sites including on a train as a durational work as part of rolling stock festival, in the cultural centre in perth and on a beach in mumbai, india, disrupted festival of ideas, and curtin university. resist was further adapted as a remote conflict resolution service available to visitors of the prague quadriennial. gallery visitors were offered the opportunity to nominate their own dilemmas for the team to resolve on the streets of perth, western australia. the process and outcomes were crash edited within 24 hours of submission and then available both online and as part of the australian exhibit in prague. 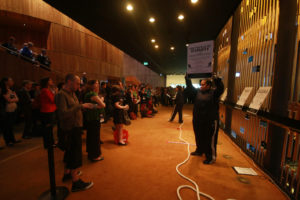 your worship, fellow councillors, ladies and gentlemen, thank you for this opportunity for a public address, we herald from perth and come before you today with a simple request for participation....

resist: the right to revolution was an early iteration of resist. it was a participatory performance work seeking to construct or amend a country’s constitutional rights using tug-of-war as a battleground to instigate revolution.
developed as a split-site work, audiences were dressed in satin capes with the name of a famous revolutionary written on the back and they chose a side ‘for’ or ‘against’ the right to revolution. during the course of the show, they were trained, tested and challenged on their true convictions. finally, fourteen champions were selected to battle over the declaration to decide whether it became enshrined in a new bill of rights – determined by the people, for the people.
meanwhile, hooked up via a video link and screened live into the performance space, a lone revolutionary mounted a guerrilla campaign on the city streets, searching for comrades with a revolutionary spirit to join him. their mission was to infiltrate a state leader’s workplace to deliver the results of the tug-of-war contest and hand over the mantle of champion of the people to them.