a performance club for ideas in development.

kiss club encourages practitioners from live disciplines to explore, test and experiment with their ideas and receive immediate feedback from an audience of peers. with up to six artists presenting ten minutes worth of material and a ‘q&a’ session with an invited speaker, each evening gives a fast and furious insight into what’s bubbling in the hearts and minds of perth’s experimental performance makers.

the kiss club model is gifted to pvi by creative comrade, artist and activist karen therese. 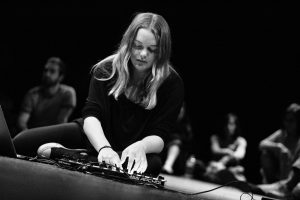 x Alex Wolman: attempting to jump on and off a box five hundred times in ten minutes

x Toyi-Toyi Theatre – Monkey Bars – Lets play a game. I’ll be the government, and your children are invited to come play behind bars. Don’t worry they will not suspect a thing.

x Loren Kronemyer – Natural History – A participatory journey that takes players backwards through the depths of our evolutionary timeline.

x Jen Jamieson – Flag Boat – How do you sink a paper boat? Firstly, you have to instruct someone how to make one. One, two, three, yell.

x Fee Plumley – Release These Thoughts – I have become increasingly obsessed by The Commons and the freedoms which have been taken from humans all over the world, because: profit.

x Kynan Tan – Metagenome – Contemplates the network of life by translating the metagenegenomic DNA data of an ecosystem into dense, textured, evocative sound.

x Hellen Russo – Things that Matter – Explores the overwhelming and suffocating feeling of compulsive hoarding and the struggle to get rid of useless objects linked to memories and deep attachment.

x indigo eli – (with(in)side) out – A thought-data experiment, an exploration of embodiment and knowledge, a perceptual translation of Records of Translation (Devon Ward)

x Kathleen Szalay – Tiny Dancer – She dances for you because you stopped to listen. He dances for her but not for all, hidden in plain sight stuck to the wall.

x in conversation with Kate Raynes-Goldie – Women in the Gaming Industry, and How Games Are Changing Society For The Better!

and we are very excited to introduce Kiss Club House Band: Blackwall Reach!

Q+A – Senator Scott Ludlam – Arts Funding, Data Retention and Myanmar Voting – Scott Ludlam is the Deputy Leader of the Australian Greens and spokesperson for Foreign Affairs, Broadband and Communications, Nuclear and Housing and Sustainable Cities. He was elected to Parliament in November 2007 and again in April 2014.

x Janaina Moraes in collaboration with Georgia page and Josten Myburgh – A Picnic – What did you bring to share?

x Trihedral Sector – It’s Getting Awkward – A contemporary dance work exploring the challenges and variables in greeting people for the first time.

x pvi collective – blackmarket – a global economic collapse just around the corner. get the skills you will need to survive – learn how to weaponise garbage or master psychological coping mechanisms – pvi have a whole bunch of new services to try out…

x Elise Reitze – Adventure Tune – An interactive puzzle of electronics, lights and sounds in which an audience member must navigate through successfully to receive the ultimate reward – a piece of music.

presented by pica and pvi collective (currently in call-out phase)

in 2017 we joined forces with pica to co-present KISS club.

x Renegade Productions – ‘sermon for the material age’, a sermon for the godless and spiritless, a ritual with the participation of the audience.

x Jess Moyle and Andrew Sutherland – ‘cephalopod’, an inky satire of politics and survival, of decoy bodies, feeding frenzies, fish-and-chip shops and high-heels for every tentacle. welcome to the squid millennium.

x Renee Newman – ‘seeking basic needs and other tales of excess’, an audio tour involving stories of migration, notions of need and simple acts of transcendence.

x Your Mouth Collective – ‘lady of the lavender’. bridging forms between movement, text and live instruments. inspired by the symbolism and cultural significance of lavender flowers, and all-too-common life experiences.

x Charlotte Otton with accompaniment by George Ashforth – feminah
An exploration of vulgar women through song and storytelling, Feminah is an ode to women who embrace the beast within and refuse to be censored.

x steamworks arts – flesh and bones
An exploration and re-framing of Australian colonial ‘heroic’ archetypes such as explorers, bushrangers and squatters as embodied by female performance makers through a  post-colonial lens.